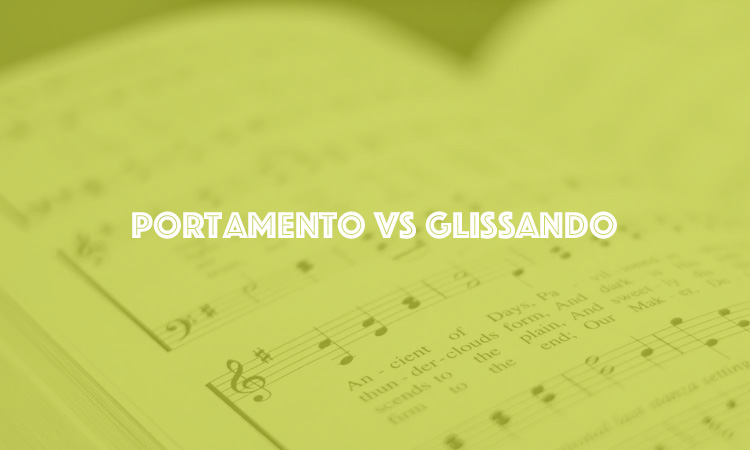 When it comes to understanding portamento vs glissando there can be a bit of confusion when attempting to differentiate them. However, there are some easy ways to distinguish them and help you remember the difference.

In music, portamento describes the sliding from one pitch to another in a smooth progression. This progression doesn’t have an emphasis on the intermediate notes.

This term was first used in vocal performances from the 17th century, although it is also popularly used in stringed orchestra settings.

Glissando is similar to portamento, and because of this they are often confused or used interchangeably. However, unlike portamento, glissando refers to the sliding from one pitch to another while retaining a distinction in the semi-notes between the start and finish.

Portamento vs Glissando – What’s the difference?

To put it into simple terms so that it’s easier to remember, here is a simple way to think about these two terms.

Think about a portamento as a seamless slide between two different notes that doesn’t focus on the semi-notes in between.

A glissando consists of individual notes, each sounded out distinctly, no matter how quickly they are being played.

You may even consider glissando as being slightly more ‘broken up’ than portamento, as the individual notes are all being sounded. Whereas portamento glides over them without breaking out of the movement.

These two terms are easy to confuse, and even many musicians find themselves using them interchangeably when describing them. However, there is a distinction that is worth noting so that you can better understand, read, and play these two effects.

If you found this post helpful, keep an eye on our blog for musicians for more helpful tips, if you are looking for resources to take your career to the next level check out our free music industry directory!